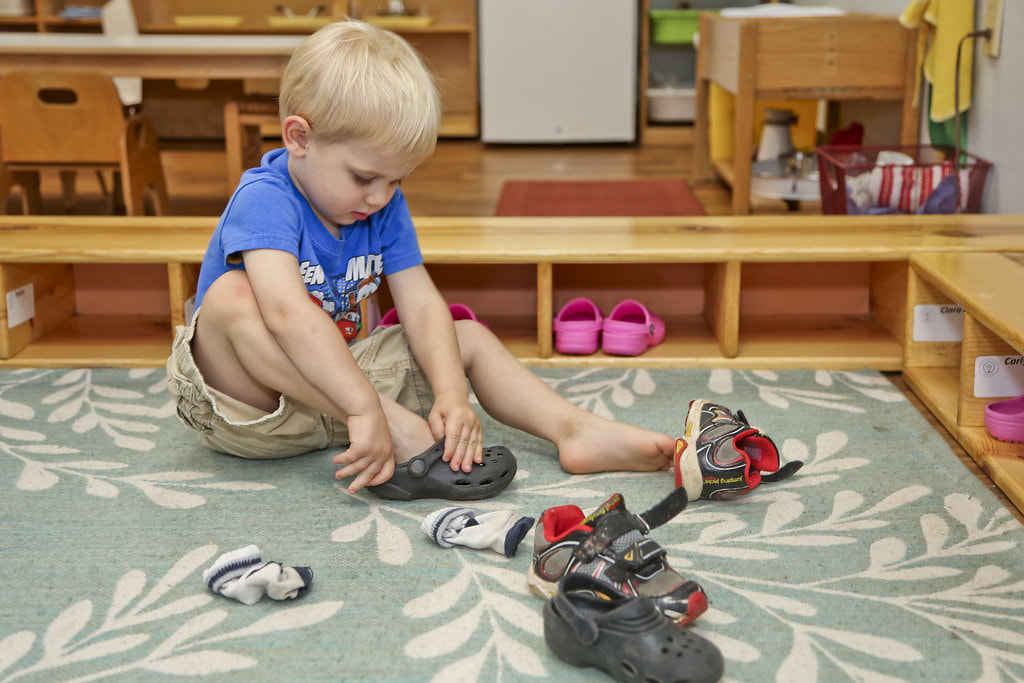 Every parent’s dream for their child is to grow up and become an independent adult one day. Those who choose to have their child follow the Montessori way do so because the method guides a child to grow into an adult who thrives in life and is full of self-confidence. Independence is the greatest gift a parent can give a child – and Montessori promotes that.

The Montessori Method promotes independence by giving a child the ability to make their own choices, providing gentle guidance and allowing them to learn through play at their own pace. The Montessori way removes unneeded discipline and traditional lessons, providing a flexible and empowering learning environment.

The Montessori method will help promote independence in your child by giving them faith in themselves. By no longer being served, overly directed or punished, children learn to figure out things on their own. They will make their own choices, discover the world on their own, and teach themselves along the way.

Maria Montessori developed the Montessori Method by focusing on the scientific part of the child’s development. She believed that education should prepare a person for their adult life by giving them the tools to be independent now and in the future.

Montessori’s method is based around the needs of a child and backed by scientific observations.

Montessori realized a child is capable of far more than many of us assume. When left to make their own choices in an incredibly supportive environment, the child will realize their potential, gain independence, and enjoy increased confidence. Instead of the classroom being taught as a homogenous whole, each child will learn at the pace that fits their individual needs.

The Montessori way stresses independence because, as Maria Montessori once said: “Educating young children is educating them for independence.” The Montessori philosophy of “Help me to help myself” emphasizes that giving the child room to explore and learn on their own benefits them more than having things done for them.

The Montessori Method essentially says: Help me by giving me independence, so that I can help myself throughout my life.

Examples of Helping a Child to Help Themselves

While a traditional class teaches first and foremost to educate, the Montessori way strives for children to gain more knowledge by allowing them to discover and do more on their own.

Waiting on a child hand-and-foot or anticipating their needs before they can find their own solution does not allow them to do tasks they are capable of on their own. In this scenario, even the most loving and well-intentioned adults are stunting what a child’s level of independence could be.

The Montessori Method has a simple outcome: giving independence and confidence to every child.

What Are The Core Principles Of The Montessori Method?

In addition to independence, the Montessori Way includes several other important principles:

Play Learning is Essential to the Montessori Way

The Montessori Method also feels that learning should be fun and not forced. A child will feel that they are playing simple games or having fun with their toys.

As they play, children are learning from something as simple as putting together a puzzle, playing with wooden blocks, setting the table, or acting out a scene from a book. These activities all seem more fun than a chore – and children grow from them in a way that is different from lessons.

In Montessori, play is voluntary, and activities are self-chosen. There is no prescribed length of time for play – a child can decide when to stop playing and move on to something else.

Whereas an adult feels the need to complete a given task, in Montessori, the task isn’t the goal. It is an activity a child is doing because they enjoy doing it. They can move on at any time, without the need to “complete” it.

In addition to these principles of play, here are a few others from MariaMontessori.com:

How Does Montessori Promote Independence From Infant Age Through Childhood?

At every step of the way, the Montessori way promotes independence. Letting children learn on their own and learn from their mistakes without worrying about punishment creates a safe environment for them to learn. This starts as young as infanthood, with age-appropriate, independence-building tasks, such as:

And so on. Every age-appropriate activity that helps a child to do something for themselves – and even help the parent or teacher – is an opportunity to grow and learn the Montessori way.

At all ages, the child can decide if they want to work together or alone, and what task they would like to do. When a child is happy and enjoys a task, they will thrive at it.

Children can pick their activity and work on it at whatever pace they want. Plenty of time is given to finish an activity so that a child never feels they need to hurry and finish their work. They will get more from the task and enjoy doing it.

Is The Montessori Method Just For Young Children?

When a child is young, their minds are the most absorbent. Helping guide a young mind toward the skills needed to become an independent adult is most naturally done in the first six years of life. Most Montessori classrooms work with children of all ages.

In Montessori, children aren’t placed in grades according to biological age. In fact, most classroom groups are mixed-age. It is a much more flexible determination of level based on the individual child’s development. The Montessori Method recognizes four stages of growth:

No matter how old the child is, starting the Montessori way of teaching can be extremely beneficial.

Main Differences Between Traditional Schooling and The Montessori Method

Giving a child a positive, untimed learning environment where they feel in control of their actions greatly helps their confidence to be independent. A traditional school can feel rushed and overwhelming to some children while others feel bored with daily activities. But a Montessori classroom will allow the teachers to step back and let the children learn while making sure their individual needs are met.

“The greatest sign of success as a teacher is to be able to say: “The children are now working as if I did not exist.” – Maria Montessori

Who Benefits from the Montessori Method?

Traditional Montessori classrooms keep a child with the same teacher for three-year or six-year spans, which provides stability, trust, and consistency. This proves to be very beneficial for children’s growth, comfort, and confidence in the classroom.

What About Children with Special Needs?

A child with mild to moderate sensory issues is likely to feel comfortable in the quiet, individually-paced environment. When the child feels at ease and is provided with a consistent and stable world of the Montessori classroom, they are more likely to learn and take things in when their senses aren’t overloaded.

In the Montessori classroom, each child’s needs are individually addressed, which makes a more productive and less chaotic day for the class. When kids aren’t bored, overwhelmed, stressed, or unheard, they only need to worry about learning and exploring.

Parents Can Help Encourage a Child’s Independence at Home

By letting the child do tasks on their own and venture out to the world to explore with little guidance from you, you’ll see a change in the child and a spark inside of them with just some simple tips on starting. Let your child:

The child will surprise you with what they can do when you essentially get out of their way. Many children assume they are not allowed or big enough to help. When you allow them to help or do it on their own, their self-confidence will grow.

The Montessori Method successfully prepares the child for growing into a confident and content adult. Letting children learn on their own by exploring the world around them allows them the opportunity to develop and bloom by gaining independence and confidence.  The benefits a child gains through Montessori will last throughout their life.